The 7 Quick interesting Facts About Parrots

Birds are just one of the creatures that can be easily domesticated and have high convertibilityto becomehouse pets. Based on the recent statistics in America, birds ranked in the 4th place of the top 10 favorite house pets. Among the types of birds, the most outstanding of them all are parrotssimply because they are intelligent and highly sociable. Listed below are some quick interesting facts about these feathery friends.

Aside from possessing the intelligence of 5 years old, parrots can mimic different sounds not because they have vocal cords ratherthey use their muscles to control the air that flows in and out of their body.

There are 350 known species of parrots in the world, and most of them can live up to 50 or even 100 years. The current titleholder of the longest parrot that has ever lived is the 83-year oldMajor Mitchell’s cockatoo, belonging in the species of Lophochroaleadbeateri, at Brookfield Zoo in Chicago. 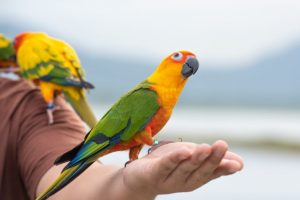 Birds, in general, can see UV light and they even have better perception than humans in terms of differentiating almost 2 identical colors.

4.      Male parrots give calcium supplements to nourish their partner.

Before mating, some parrot species grind their calcium supplements to be given to their partners. This behavior is most observed in male vasa parrots based on the collaborated study conducted by two institutions: the University of York and the University of St. Andrews.

Unlike other birds, parrots have approximately 300 taste buds on the roof of their mouth and glands at the back of their throats. Their upper and lower mandibles are so movable that makes them grind and bite their food efficiently compared to other birds which have a stationary upper mandible.

In terms of protection, parrots produce a pigment on their feathers called Psittacofulvinswhich is bacteria-resistant. This pigment does not only protect them from parasites and bacteria that cause feather-related diseases but also contributes to their beautiful colors.

Most birds are anisodactyl, where the first digit called hallux faces backward while the other 3 digits are facing forward. The parrots, on the other hand, follow a different foot configuration which is zygodactyl. A zygodactyl foot orientation has the second and third toes facing in front while the hallux and the fourth toe are facing backward. Because of this, parrots have a better grip on picking anything with their toes.

If you want to know more about parrots and how to take good care of them, you may visit Talkie Parrot.